Why bother mapping front organization events? First, because congresses, conferences, and seminars were the fronts’ preferred propaganda medium, to which they dedicated the most time and money. Second, because event locations were often vital to their content. Third, because kepler.gl lets visitors modify the maps to suit their interests. The following two examples were written in this spirit–in order to inspire further exploration, provided the explorers keep one proviso in mind. Not all front events have been entered into the databases, which makes generalized inferences tentative, not conclusive. (To gauge how many events a given Data Set still needs to reach completion, follow the “view Data Set” instructions beneath the aggregate map, and look for gaps in the dates.)

Example one: Mapping classes of events
Each of the twenty Data Sets that our maps now include is specific to an organization (e.g. WFDY), and a class of event (e.g. Executive Committee meeting). This matters because Executive Committee meetings and Congresses were different affairs–one small and closed-door, the other large and well-publicized, with speeches published in full in many Communist newspapers. Which raises an interesting question: did communist fronts hold different sorts of event in different places? Were, for example, Congresses more likely to be held in countries beyond the bloc, where they promised to get more coverage from non-Communist news media? For a tentative answer to this question, start by looking at the static image below from our selective map with all twenty Data Sets showing, where each event is marked by a dot (Point). If the dot is white, multiple events took place in the site indicated; and if it’s non-white, only one met there. 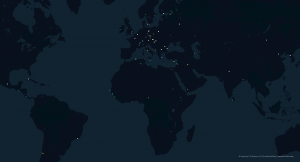 Now remove all non-Congress Data Sets from view by clicking their eyeballs shut on the Layers tab (if that’s gibberish to you, consult the instructions under the aggregate map). What remains are only the Congresses of the six organizations on the existing database: WIDF, WFDY, IUS, IADL, IOJ, and WPC. 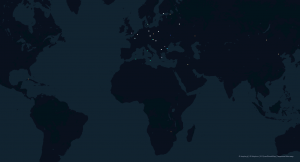 By comparing the two, we see that the Congress-only map shows a higher proportion of events held in Europe than the one that includes all classes of event. Moreover, each of the six non-European cities that did host a Communist front Congress hosted only one. (The Russian city of Omsk, which some might consider a seventh non-European host city, also held just one.) Within Europe, meanwhile, we see little change in the proportion of Congresses held in the western half versus the eastern half.

Why, the map prompts us to ask, did fronts not hold more of their banner, international events, attended by hundreds of delegates and dozens of journalists, outside of Europe? A reasonable hypothesis ties demographics to transportation costs. If a majority of Congress attendees came from Europe, which they did, then a Congress in Ulan Bator, Mongolia posed two dangers: one, that fewer West Europeans might pay for a trip to Mongolia than would to a European city, including fewer news media; and the other, that even if most Western Europeans did cover their travel expenses, Communist governments would still pay heavily to ensure robust attendance.

Example two: Time
A key attribute of kepler.gl maps is their ability to map events in time as well as space. To test this out, let’s use the aggregate map to compare where events of all classes met in four separate decades: 1945-55, 1955-65, 1965-75, and 1975-85. (The late November start date was selected arbitrarily.) 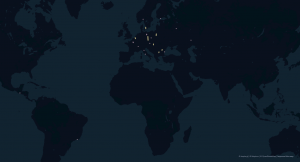 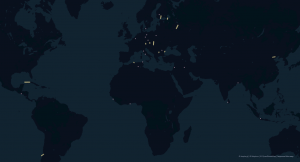 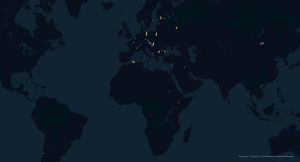 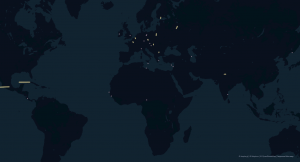 The fact is that there are simply too many holes in our current Data Sets to draw any robust conclusions from these four maps. But if we imagine that these were representative, an accordion-style pattern quickly reveals itself. In the Cold War’s opening decade (if we permit Nov. 24, 1945 as a start date!), the accordion was tight at the center, around Europe, with just two events held beyond its borders. In the postcolonial decade to follow, the map blew wide open, with front events scattered across five continents. The accordion drew back after the postcolonial elan had passed, in 1965-75, before expanding wide once again with the decline of China’s anti-Soviet outreach to Africa and Asia, and the resurgence of Soviet and Soviet allies’ aid to new socialist republics in Ethiopia, Mozambique, Angola, Afghanistan, and Nicaragua.

With that as an introduction to what the site’s maps can tell us, I urge you to embark on the maps. And mindful of the incomplete Data States’, I invite you to send me any currently unlisted events for review. Finally, please cite the website with whatever conclusions you draw from it and put to paper or screen.